Trippin’ on the right words to say in this review has made it twelve days after the matter since their first show for California at The Fillmore. There was no hesitation in buying tickets to all three shows, even San Francisco despite my lack of transportation. Train? Bus? Plane? I’d figure it out later.

I was one of the few fortunate to attend an intimate rehearsal at Encore right before their EP High Rise dropped back in 2013, couches, drinks and delicious food with low lighting, the floor covered in rugs with the band performing practically at arm’s reach. It was great, six songs performed quite impressively but nowhere near in energy Chester was famous for. Didn’t really expect it given the intimate setting.

Ever since that night, meeting Kretz and the DeLeo brothers for the first time and seeing Chester in such a different feel, I knew I not only wanted to meet them again but I had to see them take a stage and give it their all.

It was my first time at The Fillmore in San Francisco, the fact made obvious when I walked right past it and had to circle the whole block, finally asking a small group of folks standing in front a board covered window in the brick structure if that was the box office. They immediately knew I was new to the famous venue.

I spent two hours before doors talking to the growing lines of people coming for the show. I caught sight of maybe one or two other ‘youngsters’ that looked my age, but otherwise I was surrounded by fans of Stone Temple Pilots, the band that was rocking around before I was even born- a topic well discussed for the two hours. “What’s a lovely, young lady like you doing here?” one of them had asked me as we waited.

There were a handful there who didn’t care Weiland was replaced, simply excited for ‘a damn STP show, finally,’ there was a guy with a Linkin Park shirt hard to ignore amongst the group of fans way past the years of reppin’ a band shirt. Those I won’t forget, though, were all the STP fans that weren’t sure about being there; “Not sure yet how I feel about that Chester….”

After listening to their stories about the best shows they’d seen at The Fillmore over the years, about Stone Temple Pilots back in their days, about my age and the fact I actually know my STP songs, after a bit of an intense discussion over ‘you’ve seen Linkin Park where and how many times!’– it was finally time for doors and I had to get into another line for those attending the Meet & Greet, making friends with two guys a little closer in age to me.

Upstairs, skipping the details of our freaking out, VIP were escorted to an area overlooking the stage and floor, custom posters of every show there lining the walls, old chandeliers over our heads. A set of curtains separated us from the band, each fan or group of friends called in one by one, phones or cameras taken immediately to have your photo taken with them. It was different from the rehearsal, all of us in group together as the band moved along the group greeting us. It was a much more personal greeting this time and we loved it.

I noticed Chester was very quiet and soft in his actions and presence during the Meet & Greet, Rob and Dean, and even Eric, almost too loud next to him, very different from how he’s always been meeting him at Linkin Park shows and events. Leaving after a wonderful meet and heading down to the floor, easily weaving through the relaxed crowd towards the front to find my new friends, I got to chat to a couple others that had also met them and many admitted; “I was surprised Chester is so quiet and kind of shy.”

A bit of a sad realization hit, especially when my friend told us how he had handed his Purple cd to Chester to sign and Chester asked “Are you sure you want me to sign it?”, my friend chortling at the ‘joke;’ but it was actually Chester still being, careful, amongst Stone Temple Pilots’ fans, like the atheist tattooed-and-pierced boyfriend brought to meet the parents and family at a church party on Easter. When my same friend came down to Anaheim for VIP again- he absolutely loved meeting them- and he stepped in with me and another familiar face, the Chester every Linkin Park fan knows and loves came out. He recognized us, but more importantly, he recognized the huge STP fan my friend was that came to happily meet him again.

At The Fillmore, I missed the opening band Spiralarms during the Meet & Greet, making it down onto the floor in time for Dreamers. Fantastic performance, quite frankly. Meeting their tour manager in Hollywood later on, he had asked me to describe in one word how it felt seeing Dreamers the first time, and honestly, ‘great’ sums it up. Their energy is high, the music is well written and performed; I proudly purchased their EP and cannot wait to see what this tour brings for them, record deal offers already pouring in and the band isn’t even two years old yet! They were loved and chosen by Chester, and I couldn’t be happier for them.

My first show of three was memorable- the performance was very different from the rehearsal, and it was chilling just how great Chester sounded. Every fan that had stood in that line with me before doors, uncertain of how they felt about Chester taking the vocals for their favorite band, were stoic for the first song, hard to read their expressions as others were already enjoying their night.

By the time they finished “Wicked Garden,” though, it was obvious how impressed they were, hard to resist how happy and lively Robert and Dean were either side of Chester as he nailed every part with Eric’s grin beaming behind them at the drums.

After three shows, three different cities, I still think the most dangerously perfect trek of the set list is “Wicked Garden” followed by “Sex Type Thing” and “Pruno.” Never has “Pruno” been an obsession of mine until seeing it performed that night and twice after just wasn’t enough. The song was absolutely destroyed and made theirs again, thrown out for us to devour and want more.

Of course the ‘defining’ moments for these loyal fans and Chester as the new frontman were with “Plush” and “Interstate Love Song,” the excellent mix of an acoustic and normal performance for “Plush” stunning, stepping down from the stage to sing with everyone, shaking hands and giving hugs without missing a note. “Dead and Bloated” was the perfect end to the night with every hand up shouting back the words with them. 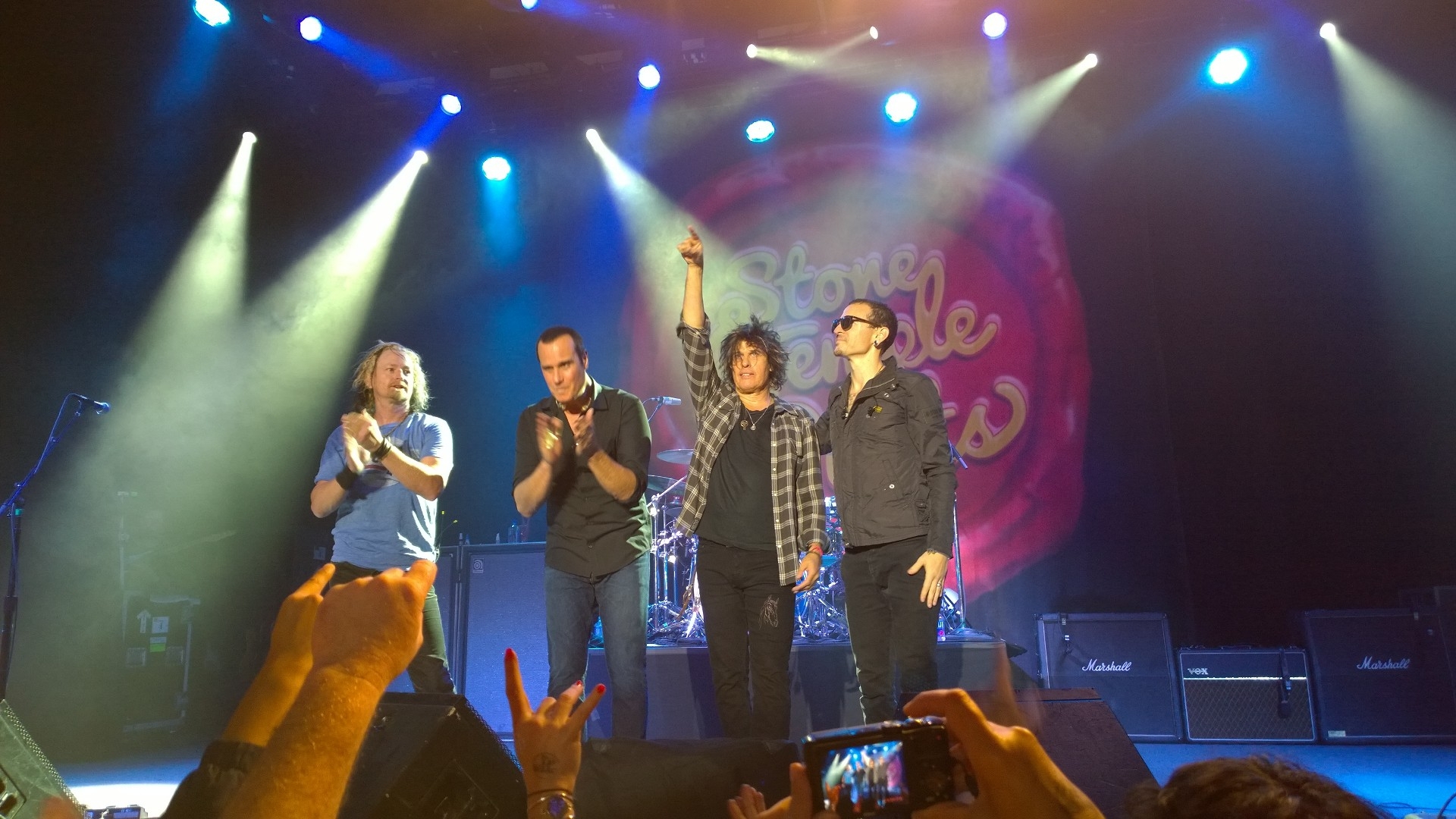 I’ll never forget looking around that night as Stone Temple Pilots stood together and bowed, every single face in the crowd that I could see laughing and smiling as they roared their enjoyment, drinks up in toasts and hands clapping. I had so many ruffle my hair and kiss my crown as they found their ‘crazy young kid’ and tell me “He’s great, absolutely great,” and I’ll never forget seeing one of the oldest fans I had met take Chester’s hand and give his arm a firm pat, thanking him with the slightest glaze of tears in his eyes looking right at him.

“Chester NAILED every note beautifully! Go glad the DeLeos are back on the road! This band is not only legendary, they are so talented and forceful! Loved it! Thank you, STP for the memorable night!” -Galina

“FANTASTIC show, Chester Bennington so generous with his time after the show for autographs, pictures and I called my daughter in Seattle and he took the phone and said hi to her!! Who does that? Amazing artists who know the value of fans and love!” -Michelle

Anaheim and Sunset were mixed with many younger fans supporting Chester and barely getting familiar with Stone Temple Pilots’ older legacy. The band still gave it their all, but I think The Fillmore in San Francisco and certain other cities will always have a little more of a special connection as he earns the respect and love from fans there for Stone Temple Pilots from the very beginning.

The only argument being left for STP fans unwilling to move on is ‘it’s just not the same’ because clearly, Stone Temple Pilots sound and perform at whole new level above expectations now.

AltWire has an exclusive interview with Chester Bennington, the first since Linkin Park’s unfortunate…

LifeBoxset asked Chester about The Hunting Party, today's radio and if him being at…

Stone Temple Pilots and Chester are currently out on a short US Tour. To…

Donate to the One More Light Fund